The winners of the first Greek Prix Galien 2013

Over 600 people from the pharmaceutical, scientific and political scene attended the Prix Galien ceremony held for the first time in Greece at the Athens Concert Hall. The president of the organization, Ms. Jenny Pergialiotou thanked the sponsors and welcomed attendees to the event, indicating that Prix Galien Greece will promote the Greek community information on innovation.

The ceremony was held under the auspices of H.E. President of the Hellenic Republic Mr. Karolos Papoulias and the support of the Association of Pharmaceutical Companies and the Medical Association of Athens.

With the political intervention of the Secretary of Industry, Mr. Spyros Efstathopoulos, saluted the event and emphasized in particular that “the pharmaceutical industry is a privileged partner and ally of the state in an attempt to re-enter the country on the path of development,” and the president of the National Drugs Organization (EOF), Mr. John Tountas, among others introduced of a new legislative framework for clinical studies, and direct institutional reform of EOF, the concentration in the Agency all relevant powers to the drug.

In his address, H.E. U.S. Ambassador to Athens, Mr. Daniel Bennet Smith, praised the institution of the Prix Galien Greece, and noted in particular that “the Greek government should develop appropriate economic environment to the pharmaceutical industry so that to develop innovative and developmental activities for the country”, while at the opening of the awards ceremony, the president of the jury of the Prix Galien Greece, Prof. Aristides Patrinos, emphasized in particular that the institution deserves to be established in Greece.

The winners of each category are as follows:

Apart from the above awards, a humanitarian award, the Pro Bono Humanum, was awarded to Mrs. Marianna V. Vardinoyannis, UNESCO Goodwill Ambassador and founder of the Children’s Oncology Hospital “Marianna V. Vardinogiannis” in Athens, for her great contribution in the health sector. Receiving the award, Ms Marianna Vardinogiannis stressed that “cancer is defeated,” and that “my duty has always been to offer our fellow man.” 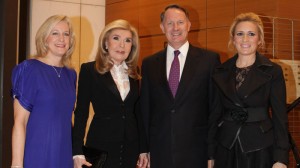 (from left to right) The wife of HE US Ambassador Ms. Diane Smith, Mrs. Marianna V.. Vardinoyannis Goodwill Ambassadress of UNESCO, HE US Ambassador in Greece Mr. Daniel Bennet Smith and Ms. Jenny Pergialiotou, President of Prix Galien Greece