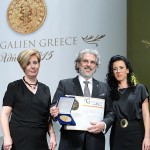 Being an institution that eminently rewards research and innovation, the Prix Galien could not exclude from the awarding procedure research as such. Therefore, Prix Galien Greece 2015, inaugurated a new award, the Galien Scientific Research Award, which rewards a Greek researcher or a research team for the great research work which resulted in significant benefits for our fellow men.

In Prix Galien Greece 2015 this award was bestowed honorary to biologist researcher of Biomedical Sciences Research Center “Alexander Fleming”, professor of Experimental Physiology at the Medical School of Athens and Member of the Academy of Athens Dr. George Kollias, for his forceful international contribution to the conception and promotion of the use of biological anti-TNF therapy for rheumatoid arthritis. Additionally, for his several studies that have highlighted the molecular and cellular mechanisms of pathogenesis and new therapeutic targets in transgenic models of chronic inflammatory and autoimmune diseases such as inflammatory bowel diseases and multiple sclerosis.

The Galien Scientific Research Award is awarded to Greek scientists who have contributed significantly to innovation through the development of innovative ideas, products or methods for the diagnosis or treatment of diseases.

Entitled to apply are Greek scientists, the research of which was executed in research entities nationally (including Universities, Research Centers, hospitals, clinics, pharmaceutical or biotechnology companies).

Entitled for applications are participants who are of Greek origin and come from Academic Institutions, hospitals, research centers and the pharmaceutical industry.

The candidacy is compulsory and must be done online through the official website of Prix Galien Greece Awards www.prixgalien.gr. The submission can be done either by the candidate himself, or by a third person.

The winner over the medal of the Prix Galien will additionally win an honorary fee of 10.000 €.